These days it’s not difficult to catch a glimpse of Cornwall on the small screen, what with Poldark, Doc Martin, and Delicious on the main channels and repeats of Wycliffe usually on some more obscure channel. All these programs act as great adverts for the county, showing its scenery off behind the drama being played out in the foreground.

On the big screen, Cornwall has been seen most recently in the ‘Fisherman’s Friend’s’ film and, ‘The Kid who would be King’, a modern take on the King Arthur story, filmed partly on Bodmin Moor. Richard Curtis’ 2013 film, ‘About Time’, was filmed mainly down on the Roseland peninsular, as was ‘Miss Peregrines Home for Peculiar Children’, Tim Burtons time travelling fantasy, although in this, Cornwall became Wales with a whole village built at Portholland.  It wasn’t the first time Cornwall has been relocated to another part of the world, in ‘Die Another Day’ James Bond turns up in an Icelandic diamond mine, which was actually the Eden Project and back in the 1920s Alfred Hitchcock filmed his last silent film ‘The Manxman’ in Polperro, even though the film was supposedly set on the Isle of Man.

In the mid-20th century Polperro was actually used for several films, now mostly forgotten. ‘Miranda’ was the tale of a mermaid, ‘The Great Behemoth’ an early monster movie and ‘Another Time, Another Place’, Sean Connery’s first film in which he had a starring role.

Just down the coast, the historic port of Charlestown has become a haven for film crews. It often features in Poldark but has also been seen recently in Dr Who and Tim Burton’s ‘Alice in Wonderland’. Older viewers may also remember it being used in the Onedin Line.

Poldark is filmed all over Cornwall and we have a list of film location here. Doc Martin is mainly filmed in Port Isaac, (Port Wenn) on Cornwall’s north coast and Delicious is centered on Pentillie Castle on the banks of the Tamar Valley in south east Cornwall.

In the far west, the rugged coastline has been used to good effect in Poldark as well as in films like ‘Ladies in Lavender’, ‘Summer in February’ and ‘The Shell Seekers’. It was also the setting for the brutal ‘Straw Dogs’ in 1971.

The aforementioned ‘Shell Seekers’ was adapted from a novel by Rosamunde Pilcher, and over recent years many of her other novels have been filmed in Cornwall for the German market. These tv films bring many Germans to Cornwall every year, mainly just to visit the locations in the films, the same way that Poldark fans flock here now from all over the world.

And if you want to stay in a room actually used in a film, head to the Headland Hotel in Newquay, which was home to a witch’s convention in the 1990 film The Witches, staring Anjelica Houston.

And let us not forget our younger visitors. Cbeebies favourite Andy’s Adventures often takes place in a much changed Eden Project and older children may remember St Antony Lighthouse from Fraggle Rock?

Cornwall continues to provide a stunning backdrop with its many miles of coastline and picturesque countryside. Make sure you check out our own films of Cornwall here, you don’t need actors and storylines to enjoy the views 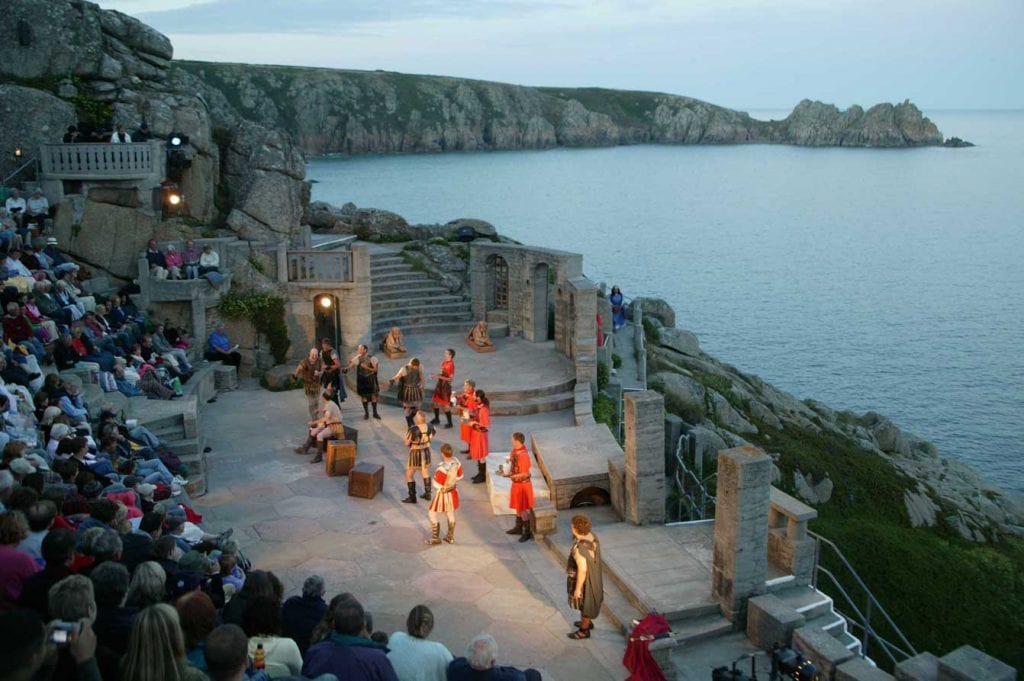